After reading yet another plea for White ‘internationalism’, in other words, White multiculturalism, I find myself compelled to reiterate why I believe this idea is wrong-headed and moreover, unlikely to be workable.

Looking at the practical side of it, how could all the disparate peoples of European descent (and they are disparate) be compelled to unite? By simply the threat of an outside enemy? That is the main argument usually; the White race is under dire threat from outside enemies who want us gone, or more accurately, under threat from enemies within and without. However it’s useful to remember that the European Union, once euphemistically called the ‘European Economic Union’ or ‘The Common Market’, was proposed as the way to shield Europe from an external threat. 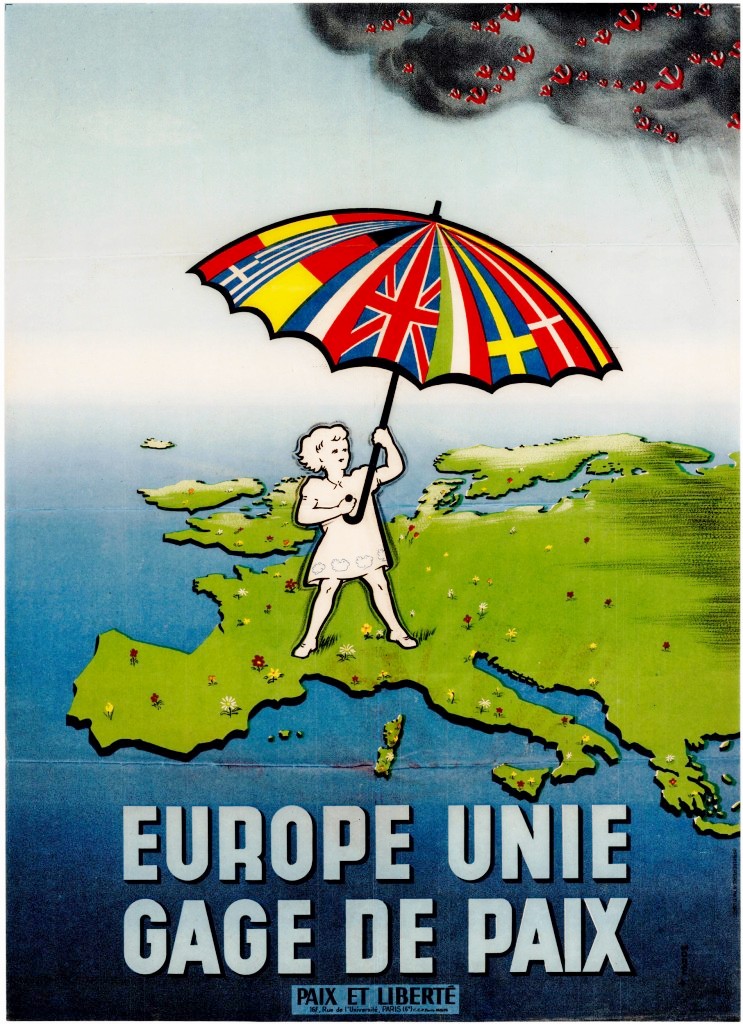 The storm clouds above the little girl have hammers and sickles, representing Eastern bloc Communism, obviously.

And how did that work out? Europeans under the EU have shown no greater resistance to outside threats, and in fact the Communist threat was simply internalized, while the European peoples still retain their differences. Many differences are good, but old grudges and grievances persist along with the healthy differences.

But suppose a ‘new and improved’ right-wing EU arose, with all the European peoples under one government, determined to amalgamate themselves into some kind of generic European. Putting aside the big cultural and genetic gaps that exist even within Europe, assuming that could all be dealt with easily, whose culture would be the dominant one? We’ve seen in all multicultural experiments, even with White American multiculturalism, that some group’s culture, by design or simply by natural strength, will dominate — or will be perceived as dominating. Whose would that be? In America, as Anglo-Saxons were the original and dominant group, theirs was the default to which newcomers were expected to assimilate and conform. And how did that work out? Centuries later, certain groups nurse grievances over things that they imagine (or read in a history book) their great-great-grandparents ‘suffered’ at the hands of the oppressor. Even ethnicities who appeared to have assimilated successfully have in recent decades suddenly ‘remembered’ or been taught that their ancestors were ‘done wrong’ by the WASP elites, and now they are born-again partisans of a nationality and culture that their ancestors left behind 100 or more years ago.

Likewise, with language. Whose language would be the ‘official’ language in some kind of White multinational empire? English would be the most plausible, given that a great many Europeans are fluent in it (Scandinavians and Dutch, for example) but imagine the Francophones, just to name one group, quietly accepting English as the, ahem, lingua franca of the new Empire?

And religion? Catholic and Protestant seem more divided than at any time in my lifetime, and then there are growing numbers of proponents of paganism or some form of ‘nature worship’ supposedly based on the legendary ‘old religion’ who are very eager to proselytize and push for the elimination of Christianity as being an ‘alien’ faith as they often insist. What then? Invent a new religion out of whole cloth, as some people propose? As if religion is something that one can cook up to order, to serve a purpose. A religion professes to be true. If it is not true, and is just an invention of some human mind (a la L. Ron Hubbard’s Scientology) then it is no religion and would not answer people’s needs for truth and meaning.

And then there are the militant atheists, who seem to exist mostly amongst White people, for some reason.

Culture, language, religion, these are all important components of a working civilization. To lack cohesion or a common basis would be fatal to the success of constructing a new ‘union’.

Can we say that, at minimum, the people (I would say more properly, peoples) of that proposed new entity should have a common blood origin, based in kinship? Because at heart that is what a nation is: a people united by a common origin and ancestry.

And along with that common origin and shared ancestry goes a shared history, a shared heritage and memory, which is naturally passed down in a body of folklore and custom and legend and tradition: holidays, commemorations of past triumphs and trials. Every nation has its heroes (and villains, too), people who are real or semi-legendary who embody the nation’s archetype, the archetype of the unique character of that particular kin-group and people. America, despite the frequent sneers that America is not a ‘real’ nation and never was, once had all the above things, and those things I tried to re-introduce into the common consciousness when I first began to blog, but that doesn’t ‘sell’ anymore.

Absent a desire to remember our past, we seem to have died a little more since the days I first began blogging.

But are we in a real sense equal kin with all European-descended peoples? Maybe more Americans (or Canadians, Australians, New Zealanders) would feel more ‘inclusive’ towards Whites who are distantly related to us, but that is because we have been given infusions of multiculturalism from relatively early in our history, and have come to believe that people who are very different can ‘become us’ just by acquiring citizenship papers, or by learning a halting version of our language.

Many Europeans are not as ‘welcoming’ that way, because they have not been made to acclimate to ‘diversity’ as the Anglosphere nations have been. And, I suppose, good for them. The Eastern Europeans fit this category as of now, but suppose they too are made to acclimate to having very different people living in their midst?

I’ve lately begun to wonder if some of what is happening to the Western countries is in part happening because the globalists, who still sit firmly in charge, want European-descended peoples to react by willingly uniting and amalgamating. Obviously they have tried, via the EU, to do this, but it seems not to be proceeding as they want, and the Anglosphere still remains recalcitrant to some degree (Brexit, for example) and America’s (failed?)attempt to turn the clock back, to ‘Make America Great Again’.

White internationalism, or some kind of transcontinental Empire of Europeans would just be one more step, intentional or not, toward forming a ‘region’ which would fit nicely into the globalists’ theoretical One World system, divided into several ‘regions.’

It’s more centralization, which is not good.
It’s an attempt to fit disparate things and peoples together by political means. It is thus unnatural.

And most importantly, to me, it is based on the utopian idea that all European peoples are, or can be treated as, equals. This is a false idea, and a false god, truth be told. Since most Western countries have become hopelessly infected with the idea of ‘equality’ and egalitarianism, this would doom the project from the start. It is not true of nations, or of cultures, and especially not of flesh-and-blood human beings.

The idea of equality, of fungibility, of interchangeability, and of leveling out all differences in the name of the ‘rights of man’ or whatever slogan has been a toxic one on which our nation is mistakenly basing itself. To have a pan-European empire built on that false foundation would be a disaster.

2 thoughts on “One (European) world”

“I believe that in the end truth will conquer” – John Wycliffe

Back to top
The Iconoclast

The Voice of Europe
Puritan Hospitality

I have Puritan dreams

The Voice Of The Social Conservative Movement

Dispatches from inside a Canadian vassal state

Where the Strongest Evidence Leads

Cambria Will Not Yield

To the Edge of Time
Europa Unitas Movement

Celebrating Anglo-Celtic culture in the British Isles and the Great Diaspora.

A Safe Place for Free Thinkers

Explaining what it is to be English

Lee in the Mountains

Doing the Lord's Work by Saving the White Race